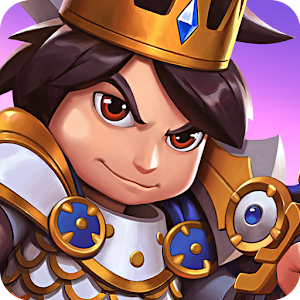 Note GAME NEED ROOT + LUCKY PATHThe dawn of a new war is on the horizon. The time has come to return the kingdom to its former glory. Where are you going to start in this RPG game?

Welcome to Royal Revolt 2, your personalized multiplayer Tower Defense where you can develop your strategy, management, action and war skills. The famous RPG Royal Revolt is back with more magic, even more adventure and a lot more action.

Defend your realm in the arena, explore and conquer kingdoms with no rush. If you enjoyed our latest RPG, you are going to love the fight and quest in its epic Tower Defense sequel.

There’s a royale revolt going on. Win the war with your mind, not with the soldiers in the arena. You have the power to write the new pages in the history of the kingdom. Royal Revolt 2 is an idle action game of clash, magic, castles, legends and conquests. Protect your honor by taking your army to assault and battle the bases of other players in a wave of action and MMO strategy.

If you liked our first tower defense, you will love this epic MMO sequel: new generation 3d graphics, simple and intuitive combat touch controls so you can get the most of your hero from this conquest idle game. Going to war had never been so real! Build your legendary empire, join an alliance and defend the throne.

Choose your lords and give tools to your guild builder to construct an impregnable fort.
Develop and upgrade your troops, spells, dungeon, dragon, magic and village thanks to treasure rewards.
Build and customize your defenses and clash the sword with your enemies.
Fight across this 3d world to become the true king.

Multiplayer strategy for COC (Conquest of Castles): Plan your resources and assign them where they are needed. There is no rush in this tower defense RPG game, you will recover your empire slowly. Choose your alliance all over the world to implement your war strategy. Fight with your friends, collaborate and analyze the strategy with your alliance members and other players from around the arena. Take advantage of the power of the animal kingdom and fight along with Pet Pals to crush the enemy.

Collect and upgrade magic, blade, armor and other items to equip your archer, summoner, monster or your paladins. Thanks to our new rts MMO features, now you can collect, wield and upgrade powerful weapons, on the road to become the most epic player ever. Strengthen your knight and warriors to win the clash with the enemy.
Take your soldiers to battle and beat rival players around the pvp arena. Perfect your tactics and forge powerful alliances with friends. Put on your real armor and create a reputation as a clan known throughout the world!

Build your empire to beat the enemy in this Tower Defense idle game. You also can choose vikings to assault the defenses of your rivals in battle for honor and war. Defend the base of your castle against the enemies building a net of defensive elite troop. Build an epic rush and get an unbeatable defense.

Go to war events with your friends in this real time multiplayer MMORPG: Participate in a variety of regular events in which you join your alliance to counter attack enemies or hurry to level up your royale tower defense strategy. Battle against thousands of players across the World to become the leader of RR COC (Conquest of Castles).

Terms of Service
Royal Revolt 2 is free to download and play, however some game items can also be purchased for real money. If you don’t want to use these features, please disable in-app purchases in your device settings. According to our Terms of Service, Royal Revolt 2 is allowed for download and play only for persons 16 years or more of age, or with explicit parental consent. You can read more here: http://www.flaregames.com/parents-guide/
By accessing or using a flaregames product, you're agreeing to our Terms of Service (http://www.flaregames.com/terms-service/).Donec at erat ante. In fermentum sit amet augue sit amet fermentum. Nullam vel aliquam magna